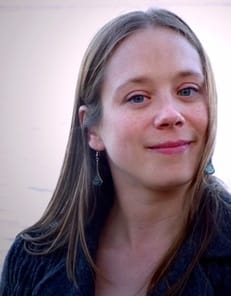 Kirsten Volness is an electro/acoustic composer, pianist, and teacher from Providence, RI who was inaugural composer-in-residence at the Music Mansion. She performs with Hotel Elefant (NYC) and Verdant Vibes (PVD), a new music ensemble and concert series she co-founded in 2015. She has been awarded the Fellowship in Music Composition from the Rhode Island State Council on the Arts three times, as well as numerous grants and commissions. Kirsten writes and performs operas with homeless advocacy group Tenderloin Opera Company, collaborates with Meridian Project on multimedia performances exploring astrophysics, and is an affiliate artist of Sleeping Weazel, She serves as Secretary of the board of Friends of the Music Mansion and is dedicated to the production and promotion of new music/media in the region. She holds composition degrees from the Universities of Michigan (DMA, MM) and Minnesota (BA summa cum laude), and enjoys teaching both privately and at the University of Rhode Island.
kirstenvolness.com 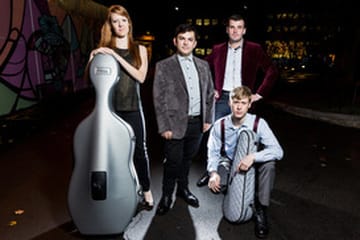 WATCH VIDEOS FROM THE PERFORMANCE
January 6, 2017 at 8 pm
Hub New Music
Hailed by the Boston Globe as “elegant and exacting,” Hub New Music is a mixed quartet crafting new experiences in 21st century sound. With a unique instrumentation of two winds and two strings, Hub explores a richly diverse palate of newly commissioned and rarely performed works for its non-standard combination. The ensemble's name is inspired by its founding city of Boston, and the notion that a Hub is center of creativity and innovation. Their program includes works by Judd Greenstein, Nico Muhly, Daniel Wohl, Mason Bates, and Kirsten Volness. •  hubnewmusic.org 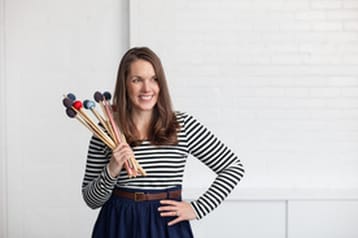 WATCH VIDEOS FROM THE PERFORMANCE
February 3, 2017 at 8 pm
Maria Finkelmeier
Named a “one-woman dynamo” by The Boston Globe, Maria Finkelmeier is a percussion performer, educator, and arts entrepreneur based in Boston, Massachusetts. Maria recently founded the nonprofit organization, Kadence Arts, devoted to incubating artistic projects, curating performances, and engaging local communities through music making. From 2012–2015, she served as the program manager of the Entrepreneurial Musicianship Department at New England Conservatory, training the next generation of innovative performers. This program includes some of her own compositions as well as works by CPE Bach, Robert Honstein, Eugene Novotney, Elliott Cooper Cole, Kirsten Volness, and more. • mariafinkelmeier.com 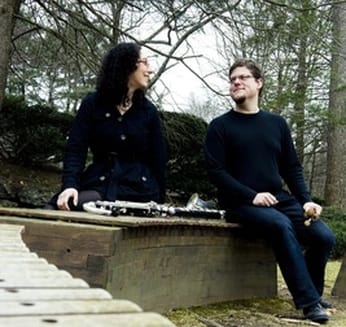 WATCH VIDEOS FROM THE PERFORMANCE
March 3, 2017 at 8 pm
Transient Canvas
Praised by the Boston Globe as "superb," the dynamic bass clarinet/marimba duo Transient Canvas (Amy Advocat, bass clarinet & Matt Sharrock, marimba) has been blazing its own trail in the world of contemporary music since 2011. In under five years, they have premiered over 60 new works, essentially creating an entirely new repertoire for their unique instrumentation. Fearless in their programming and hungry for new collaborations, TC has performed anywhere from microbreweries to Jordan Hall and actively seeks out new composers who will stretch their instrumentation to its limits. Their program includes works by Lainie Fefferman, Clifton Ingram, Emily Koh, Peter Van Zandt Lane, Andy Vores, Beth Wiemann, Stefanie Lubkowski, and David Ibbett.
transientcanvas.com 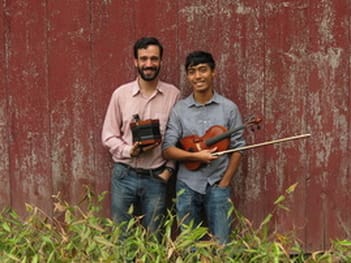 WATCH VIDEOS FROM THE PERFORMANCE
April 7, 2017 at 8 pm
The Vox Hunters
​Armand Aromin and Benedict Gagliardi are musically bound by a shared love of traditional Irish music, which originally brought them together, as well as an eclectic and ever-growing amalgam of songs both inside and far outside the realm of ‘folk music’. With fiddle in hand, a couple concertinas, banjo and a pair of complementary voices, The Vox Hunters present an exciting repertoire of driving dance tunes blended with an unorthodox collection of interesting songs and musical varia.
thevoxhunters.com 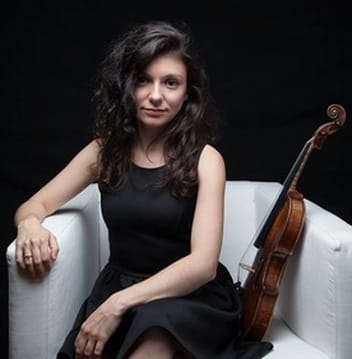 WATCH VIDEOS FROM THE PERFORMANCE
May 5, 2017 at 8 pm
Lilit Hartunian and Friends
Violinist Lilit Hartunian performs at the forefront of contemporary music innovation in Boston and internationally. Ms. Hartunian was the Creative Director of the Museum of Fine Arts' ensemble-in-residence, Vellumsound; in that role, she conceived and performed chamber music programs celebrating the many rich intersections between visual art and music. She will be joined by violinist Kate Outterbridge, violist Samuel Kelder, and cellist Jonathan Butler, to present a program of music for strings and electronics by Kirsten Volness. The composer will also perform her solo electroacoustic piano piece, ​Nocturne.
lilithartunian.com 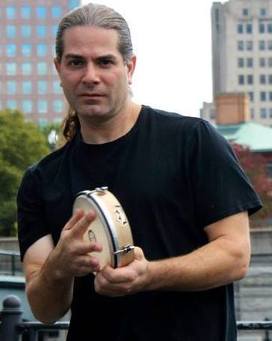 WATCH VIDEOS FROM THE PERFORMANCE
October 6, 2017 at 8 pm
Michael DeQuattro and Friends
Michael DeQuattro is an eclectic artist able to fuse together acoustic, electronic, and improvisational elements while weaving through classical, jazz, popular, and world idioms. Master of Music and graduate of The Boston Conservatory at Berklee, he has freelanced with numerous theater orchestras, jazz combos, rock bands, singer/songwriters, folk musicians, and electronic musicians across the country and throughout New England. He has a firm reputation as a collaborator and has strong working relationships with choreographers and filmmakers. Notable festivals and venues such as NYC’s Joyce SoHo, Dance Theater Workshop, The West End Theater’s Soaking Wet Series, NYC Fringe Festival, Boston’s Green Street Studios, and Rhode Island’s Festival Ballet Up Close on Hope Series have all featured his compositions. 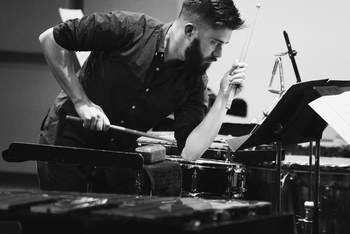 He performed the solo vibraphone part for Boulez's Répons in collaboration with the Lucerne Festival, IRCAM and Ensemble InterContemporain with Mr. Boulez as conductor. Solo appearances have included the NYC premiere of Unsuk Chin's Double Concerto at Miller Theatre; new German works at Harvard University; MC Maguire's Narcissus auf Naxos at Victoriaville Festival ("brilliant percussion work", The Wire); and as a featured soloist at SEAMUS National Convention and Princeton Sound Kitchen. He has performed in dance collaborations with Liz Gerring Dance and Emery LaCrone.

He has performed at BAM Next Wave Festival with Dawn Upshaw, Ryan Trecartin’s Jazz Fest at Park Avenue Armory, NY Fashion Week, Yale Repertory Theatre, and recitals in the UK and Oslo, Norway. Mr. Solomon has also frequently performs with Talujon Percussion, Hartford Symphony, Orchestra of the League of Composers, and has appeared with Alarm Will Sound, Talea Ensemble, Lucerne Alumni Ensemble, American Modern Ensemble, Sound Icon, and Callithumpian Consort. He is a member of Bent Duo with pianist David Friend, and founder of the Queer Percussion Research Group.

His recordings can be found on Mode, EUROArts, Cantaloupe, Naxos, and others, the score to Glass' score to Project Rebirth, and two critically-acclaimed discs of music by Reich, including Music for 18 Musicians, on Harmonia Mundi with Signal. He received his DMA from The Hartt School where he wrote his thesis on percussion and queer musicology. • soundcloud.com/solmonbill 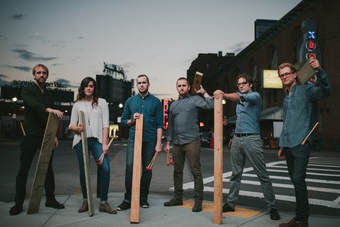 December 1, 2017 at 8 pm
Rest/Noise presents Michael Gordon's Timber
Timber is an hour-long work by NYC-based composer/member of the Bang On a Can Collective, Michael Gordon, written for 6 percussionists each playing their own piece of amplified wood (2x4, 2x6, etc.).  The conglomerate experience is a hauntingly beautiful, ethereal blend of mellow bass and complex overtones.  Timber has been hailed as "its own religious experience" (Sarah Garvey, Brooklyn Academy of Music), "bewildering yet comforting" (The Guardian), and possessing "vigor and hypnotic intensity" (New York Times).

​Rest/Noise is a performing arts collective that that revolves around percussion.  Collaboration between people of different mediums (theater, electronics, digital media) and performing music not usually heard in the Boston music scene is important to us. Rest/Noise takes its name from the quintessential read on 20th-Century music The Rest is Noise by Alex Ross; this name was gratefully approved by Mr. Ross. • hardinpercussion.com/restnoise