​FIRST FRIDAYS
THE 2020 SEASON
The Music Mansion, 88 Meeting Street, Providence, RI 02906
curated by Zan Berry, Artist in Residence
February 7, 2020 at 8pm
PVD Cello Fest, Night 1
Zan Berry  &  Adrienne Taylor, cello
​The Music Mansion will host the first night of the first ever Providence Cello Festival! This unique event will showcase the cello in a variety of genres and styles over the course of three concerts during the weekend. Additionally, a workshop on Saturday, led by jazz cellist, Dave Haughey, will inspire the next generation of aspiring cellists to think outside of the box on their instruments. The festival kicks off with the First Friday concert, featuring artist-in-residence, Zan Berry and Adrienne Taylor. ​ 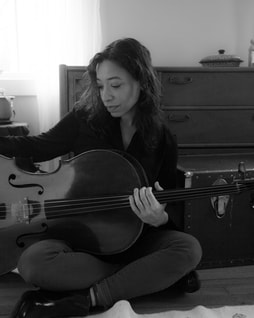 .
​
Cellist Adrienne Taylor’s unique musical voice is inspired by explorative collaborations in chamber music and across genres and performance mediums. Her work with composers and singer/songwriters as well as her work in film, theater and dance has inspired her to continuously expand her perspective on sound and its relationship to space and time.
Formerly cellist of the Boston Public Quartet, Adrienne has collaborated in performances with innovative music ensembles such as the Kronos Quartet, the Sphinx Virtuosi and Yo-Yo Ma’s Silk Road Ensemble. Adrienne has a particular interest in working with composers, and has premiered solo and chamber music works by Jessie Montgomery, Kareem Roustom, Aaron Jackson and Ken Ueno. Adrienne also writes and performs her own music, and she released her debut album, SoLa, in May 2018. 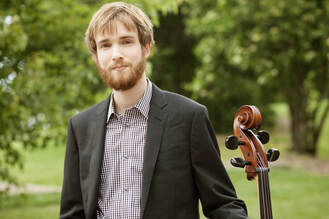 Providence based cellist and songwriter, Zan Berry, is a passionate and creative musician who weaves together diverse musical interests in his work as a performer and educator. With a ceaseless curiosity for exploring new musical contexts for his instrument and collaborating with local artists across disciplines, Zan strives for a more creative, connected, and diverse arts community in Providence. Zan performs regularly with Verdant Vibes, a new music collective in Providence that brings together artists and musicians creating new work in a variety of genres, acoustic and electronic.  As a singer-songwriter, he has participated in the Brown Arts Initiative Songwriters workshop and he recently released his debut EP of original songs, titled Loveblind.
​
​March 6, 2020 at 8pm
Balinese Gamelan and Strings

Note from Providence musician, Zachary Hazen:
"This concert is an opportunity to combine the two types of music I love most into one night of music. I have been a classical string player as long as I can remember, but I fell in love with Balinese gamelan while living in Oakland, California, and have been lucky enough to travel to Bali a number of times to study the music intensively. Over the summer I was playing a traditional piece on Gender Wayang from the village of Tunjuk, when a friend joined in on violin, reinforcing the left hand melody. The meeting of these two worlds was so beautiful and complemented each other so naturally that I wanted to explore it further, composing new music which combines the things I love most about classical western music and classical/contemporary Balinese music."

Featuring a world premiere by composer I Putu Arya Deva Suryanegara, from Denpasar, Bali, and in collaboration with members of Montreal-based gamelan ensemble Giri Kedaton, this concert will combine traditional pieces reimagined with strings, as well as new contemporary music for Gamelan and strings.

​Performers will include:
Ashley Frith- Viola
Kimberly Fang- Violin
Zan Berry- Cello
Zachary Hazen- Viola/Violin/ Gender Wayang
and more!
April 3, 2020 at 8pm
Christopher Johnson and Verdant Vibes
This interdisciplinary concert experience will feature local spoken word artist, writer, and director, Christopher Johnson, and Providence new music collective, Verdant Vibes. Both Christopher Johnson and Verdant Vibes will perform separate sets of exciting new work, after which Verdant Vibes will collaborate with Christopher performing excerpts from an original play.
May 1, 2020 at 8pm
Songwriters in the Round
In a fast-paced songwriting showcase, four local songwriters, Kate Mick, Tessa Paige, Ant Savino, and Emily Goldstein will share songs, taking turns with each other. The audience will have the opportunity to give fuel for the performers’ musical inspiration, submitting prompt ideas in the First Fridays concert in April. There will also be opportunities for the audience to learn about each songwriter’s unique creative process in a conversation with the artists.
June 5, 2020 at 8pm
The Tenderloin Opera Company and Ashley Frith
The Tenderloin Opera Company and local musician Ashley Frith, will each present sets of work that invite the audience to think about music as a tool for social justice and for better understanding our own connections as human beings.